The store will not work correctly in the case when cookies are disabled.
COOKIES
We use cookies to make your experience better.
To comply with the new e-Privacy directive, we need to ask for your consent to set the cookies. Read more

This privacy policy sets out how this website (hereafter "the Store") uses and protects any information that you give the Store while using this website. The Store is committed to ensuring that your privacy is protected. Should we ask you to provide certain information by which you can be identified when using this website, then you can be assured that it will only be used in accordance with this privacy statement. The Store may change this policy from time to time by updating this page. You should check this page from time to time to ensure that you are happy with any changes.

We may collect the following information:

What we do with the information we gather

We require this information to understand your needs and provide you with a better service, and in particular for the following reasons:

We are committed to ensuring that your information is secure. In order to prevent unauthorised access or disclosure, we have put in place suitable physical, electronic and managerial procedures to safeguard and secure the information we collect online.

A cookie is a small file which asks permission to be placed on your computer's hard drive. Once you agree, the file is added and the cookie helps analyse web traffic or lets you know when you visit a particular site. Cookies allow web applications to respond to you as an individual. The web application can tailor its operations to your needs, likes and dislikes by gathering and remembering information about your preferences.

We use traffic log cookies to identify which pages are being used. This helps us analyse data about web page traffic and improve our website in order to tailor it to customer needs. We only use this information for statistical analysis purposes and then the data is removed from the system.

Overall, cookies help us provide you with a better website, by enabling us to monitor which pages you find useful and which you do not. A cookie in no way gives us access to your computer or any information about you, other than the data you choose to share with us. You can choose to accept or decline cookies. Most web browsers automatically accept cookies, but you can usually modify your browser setting to decline cookies if you prefer. This may prevent you from taking full advantage of the website.

Links to other websites

Our website may contain links to other websites of interest. However, once you have used these links to leave our site, you should note that we do not have any control over that other website. Therefore, we cannot be responsible for the protection and privacy of any information which you provide whilst visiting such sites and such sites are not governed by this privacy statement. You should exercise caution and look at the privacy statement applicable to the website in question.

You may choose to restrict the collection or use of your personal information in the following ways:

You may request details of personal information which we hold about you under the Data Protection Act 1998. A small fee will be payable. If you would like a copy of the information held on you please email us this request using our Contact Us information.

If you believe that any information we are holding on you is incorrect or incomplete, please write to or email us as soon as possible, at the above address. We will promptly correct any information found to be incorrect.

The table below lists the cookies we collect and what information they store.

On this occasion we have to talk about energy since the process of shot blasting a piece is done by transmitting kinetic energy to an area.

The formula tells us that the kinetic energy is equal to one half of the mass times the speed squared, that is to say that the variables here would be the mass, which is the size of the particle and the quantity that is thrown plus the speed, since either the particles are blown by means of a wheel or by air pressure through nozzles in an airblast system.

The particles are accelerated through these media to transmit that energy and do the cleaning work; Another very important variable is the hardness of the particle, and in the case of steel abrasive, it is defined by the amount of carbon it contains.

Therefore, there are two types of abrasives on the market: low and high carbon steel. But how do we know which one suits us best?

Manufacturers of low carbon shot may claim that their product is better than high carbon shot with claims such as:

But here are some facts:

The use of steel abrasives with high carbon content results in:

In general, a typical operation using a high carbon abrasive can increase blast efficiency by up to 20% compared to a low carbon product.

Due to the higher intensity of the high carbon steel abrasives, more energy is transferred to the component and not to the abrasive. A low carbon abrasive will absorb a lot of energy upon impact.

Two particles of the same size (one high carbon and one low carbon) contain the same amount of potential energy, but due to the high carbon content its hardness is higher so it will transfer more kinetic energy to the work piece. The result is that the particle with the higher carbon content cleans faster.

A smaller particle size with high carbon content can transfer as much or even more energy than a large particle with low carbon content. And even better coverage can be achieved.

A smaller size high carbon shot can be used in the process. The small abrasive has a lower consumption rate as it hits the part with less impact and is subject to less fatigue stress.

A smaller number of high-carbon particles can transfer more energy than a larger number of low-carbon particles. As a result the amount of thrown abrasive can be reduced (this can be seen through the amperages of a wheel) and at the same time cleanliness can be improved.

The rebound effect (coefficient of restitution) is much greater with high carbon content particles than with low carbon content material. Result: High-carbon abrasives cleans faster, especially in areas that don't receive direct impact like the internals of castings.

Since low carbon shot is not quenched within the manufacturing process, oxides and contaminants formed during atomization are not removed. Therefore, conductivity levels are higher than high carbon abrasives. Result: Chlorides are more easily transferred to the work piece, causing possible surface contamination.

The reality is that, although it is argued that low carbon is more resistant, it is definitely less efficient in transmitting energy to the surface, so the blasting time will need to be increased to achieve the same cleanliness. Also, it is not available in angular form due to the softness of the material.

In short, it's a mild abrasive, with erratic internal quality, but luckily they're only the 10% to buy it.

W Abrasives, with 60 years in the market, has the necessary knowledge and experience to help you select the steel abrasive for your blasting applications, but above all to help you better understand your process and thus improve and make it more efficient. Do not hesitate to contact us for specialized advice, acquire tools that help control the process or obtain training.

Grit and shot stainless steel abrasives, why is it your best option? 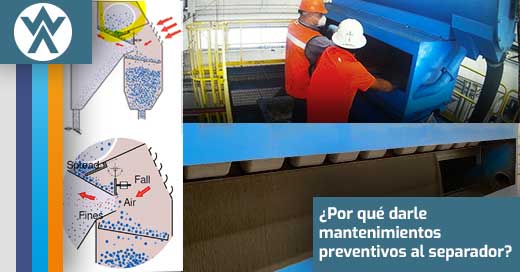 Why will the separator be your ally to improve your operational mix?